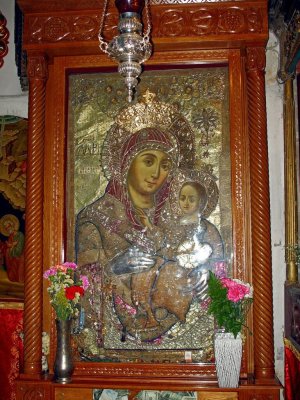 The Bethlehem Icon of the Mother of God,
also known as the “Smiling Theotokos.”
Church of the Nativity, Bethlehem.

The world is so full of indifference that virtually any sincere expression of sympathy or fellowship (or even just lively interest), coming from any other person, is worth remembering as a rare and valuable occasion in one’s life. Through the Nativity, this experience is offered to everyone who ever lived. It is addressed to each person individually: each of us matters enough that a Divine mind freely chose to walk away from timeless, absolute perfection and instead to fully share our world with us, from the helplessness of infancy to the cruelty of death.

The Nativity is the most purely joyous holiday of the Church calendar. The great triumph of Easter Sunday is inseparable from a certain sense of contrition: God forgives humanity, but nonetheless humanity’s rejection and betrayal of Him happened first. The more culpable one is, the more difficult it is to accept forgiveness. Christmas, however, is a gift that is given freely and to everyone; the suffering of the Passion is still far off in the future, and one wants to believe in “Glory to God in the highest, and on earth peace, good will toward men.”

“How the Son of God diminished Himself when He became man… But how much more did He demean Himself in the circumstances of His earthly birth! It was necessary to choose a nation into which He might be born: and he chose for this, among all the nations of the earth, the smallest, lacking its own rulers, having been many times enslaved… It was necessary to choose a city: and He chose Bethlehem, so insignificant that even the Prophet who favoured it cannot hide this admonition of it, and can find nothing else to elevate it but the name of the diminished Jesus who is born in it… It was necessary to choose [parents]…and those who were chosen, though they were both descended from kings in order to fulfill the covenants and prophecies, but already one is a woodworker, and the other is a poor, orphaned virgin.”

“Imagine how majestic it would be if we could see the sun coming down from the sky, walking upon the earth and pouring beams of light over all. If it would be incredible to behold such an event with a physical light, then think and consider how majestic it is to see the Sun of truth, pouring out its rays from our flesh and enlightening our souls. Long have I yearned to see this day, and not only to see it, but together with such a multitude of people, and I prayed ceaselessly that our gathering might be as complete as we see it now. Thus, it has come to pass and reached its fulfillment. Although it has not yet been ten years that this day has become known and familiar to us [Evidently, Christmas began to be celebrated on December 25th during St. John Chrysostom’s lifetime. -FL], but it is as if it has been known from ages past and passed down to us over many years — this is how it has been glorified through your efforts. So it would not be an error to say that [the Feast of the Nativity] is new and at the same time ancient — new, because it has only recently become known to us, and ancient, because it soon became the equal of the most ancient days and grew to the same magnitude.“