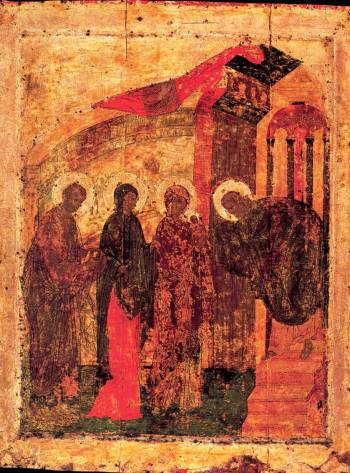 Icon of the Meeting of the Lord, Andrei Rublev, 1405.
Cathedral of the Annunciation, Moscow.

Fallen Leaves greets its readers, whoever they may be, on the day of the Meeting of the Lord.

“And when the days of her purification according to the law of Moses were accomplished, they brought him to Jerusalem, to present him to the Lord (As it is written in the law of the Lord, every male that openeth the womb shall be called holy to the Lord), and to offer a sacrifice according to that which is said in the law of the Lord, a pair of turtledoves, or two young pigeons.
And, behold, there was a man in Jerusalem, whose name was Simeon; and the same man was just and devout, waiting for the consolation of Israel: and the Holy Ghost was upon him. And it was revealed unto him by the Holy Ghost, that he should not see death, before he had seen the Lord’s Christ. And he came by the Spirit into the temple: and when the parents brought in the child Jesus, to do for him after the custom of the law, then took he him up in his arms, and blessed God, and said, Lord, now lettest thou thy servant depart in peace, according to thy word: for mine eyes have seen thy salvation, which thou hast prepared before the face of all people; a light to lighten the Gentiles, and the glory of thy people Israel.
And Joseph and his mother marvelled at those things which were spoken of him. And Simeon blessed them, and said unto Mary his mother, Behold, this child is set for the fall and rising again of many in Israel; and for a sign which shall be spoken against, (Yea, a sword shall pierce through thy own soul also,) that the thoughts of many hearts may be revealed.”

This is all that the Gospels ever say about Simeon, but Orthodox tradition rounds out the story as follows. Simeon came to be counted among the “seventy scholars” who were commissioned by Ptolemy II of Egypt to translate the Hebrew Bible into Greek. While working on the translation (so the story goes), Simeon came across Isaiah 7:14, “Therefore the Lord himself shall give you a sign; behold, a virgin shall conceive, and bear a son, and shall call his name Immanuel.” Reading these words, he thought that “virgin” must be an error in the text, and began to write “woman” in his Greek draft — but at this moment, an angel of God appeared and said, “Have faith in the words that were written, and you will see them fulfilled yourself, for you will not die before seeing the Lord Christ, born of a pure Virgin.” And, indeed, he lived to an extreme old age, and grew ill and frail, but God did not permit him to die, and each morning he came to the temple in Jerusalem, waiting for his vision to be explained and fulfilled, until one day it was.

The Septuagint was composed sometime in the 3rd century BC, so Simeon would have had to wait a long time. St. Dimitry of Rostov, writing in the late 17th century, straightforwardly declares that “in all, he lived three hundred and sixty years.” We, whose faith is pitifully weak, may perhaps be forgiven for taking the story less literally. A few historical embellishments helped to make the message more understandable to readers and listeners over the centuries, but removing them does not change the message itself. 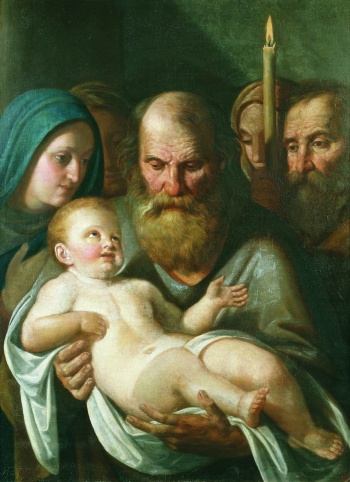 The story of the Meeting is about a man who longs for death. Whether Simeon was 360 years old, or “merely” 90, his time on earth had long passed. In his youth, one supposes that he was a respected scholar (as implied by linking him to the Septuagint), but whatever honors he may have possessed in this capacity by now surely had been handed down to someone else — younger generations are only willing to pay lip service to their elders if they don’t have to think about them the rest of the time. Everyone who had known Simeon well had passed away. The world no longer had anything to interest him, all knowledge and erudition had long shown itself to be a disappointment. Longevity also does not necessarily mean good health: Simeon’s body had broken down, he had become feeble, nearly blind; perhaps he needed help to come to the temple every day. To us, just as to people who saw Simeon in Jerusalem (most or all of whom had only ever known him as an extremely old man), such a life might have seemed ignominious. Perhaps word of his vision had spread; people may have respected his righteous life and still given him a wide berth, frightened of the way in which he had been singled out by God. At the Meeting, God grants to Simeon the gift and comfort of death, as a reward for keeping the faith through the dull, pointless decades. In special recognition of the magnitude of Simeon’s sacrifice, God is present in Person — only in this way will the reward be commensurate with his suffering.

There is also a second dimension to the reconciliation between Simeon and God. Simeon, having doubted Isaiah’s prophecy, now sees its fulfillment with his own eyes, and announces it to the people of Israel. But at that very moment, his and their historical mission is complete. Simeon, consoled and redeemed by the Lord, obtains his long-awaited death, and the world of the Old Testament likewise becomes a thing of the past, a historical prelude for the world of the New. God never turned away from His chosen people — this is the glorious culmination of their history. But it is also the final chapter of it; after this “there is neither Greek nor Jew.” In Simeon’s last words, there is not only the relief of finally breaking free from suffering, but also the melancholy of understanding the end and obsolescence of the world that he knew, and the wisdom of accepting it.

This aspect of the story was keenly felt by, of all people, Nobel laureate and anti-Soviet poster child Joseph Brodsky, who shared some of Simeon’s experience of living at the juncture of two (or more) worlds. Brodsky simultaneously felt the pull of his Jewish heritage; of the Russian Orthodox Church, into which he had been baptized at age two; of pre-Revolutionary Russian culture, personified by his mentor, the Silver Age poetic luminary Anna Akhmatova; of the cosmopolitan Western world, where he lived in comfort for 20 years. Not unlike our recent antihero Nabokov, Brodsky assembled a synthetic international identity for himself out of pure philological sophistication, which he upheld as being more valuable than any one national or cultural origin. But Brodsky’s contact with Orthodoxy gave his best work a penitential undercurrent that Nabokov was never able to comprehend in any way other than through parody.

Brodsky’s greatest poem is dedicated entirely to the Meeting. In the English translation by George L. Kline, the title is given as “Nunc Dimittis,” the Latin rendering of Simeon’s words in the Gospel (“now lettest thou…depart“) used in Roman Catholic services. But the original Russian title is “Сретение” (Sretenie), the Church Slavic name for the Meeting. The poem begins by paraphrasing the Biblical description of events, but Brodsky stays with Simeon after he finishes speaking his prophecy:

He ended and moved toward the temple’s great door.
Old Anna, bent down with the weight of her years,
and Mary, gazed after him, perfect in silence.
He moved and grew smaller, in size and in meaning,
to these two frail women who stood in the gloom.
As though driven on by the force of their looks,
he strode through the cold empty space of the temple
and moved toward the whitening blur of the doorway.
The stride of his old legs was audibly firm.
He slowed his step slightly when Anna began
to speak, far behind him. But she was not calling
to him; she had started to bless God and praise Him.

There is nothing left for Simeon to do. Everyone has already forgotten him, the women are now busy praising the Lord, welcoming the New Testament. Outside the temple, the world is full of life, but none of it takes any notice of him and the past that he represents. His “meaning” has diminished. It remains only to take the last step into death, toward God:

The door came still closer. The wind stirred his robe
and touched his cool brow, while the roar of the street,
exploding in life by the door of the temple,
beat stubbornly into old Simeon’s hearing.
He went forth to die. It was not the loud din
of streets that he faced when he flung the door wide,
but rather the deaf-and-dumb fields of death’s kingdom.
He strode through a space that was no longer solid.
The roaring of time ebbed away in his ears.
And Simeon’s soul held the form of the Child —
its feathery crown now enveloped in glory —
aloft, like a torch, pressing back the black shadows,
to light up the path that leads into death’s realm,
where never before until this point in time
had any man managed to lighten his pathway.
The old man’s torch glowed and the pathway grew wider.

In this poem, Brodsky glimpsed the wholeness that was missing from his life, and thereby redeemed his own writing. From his outsider’s perspective he could clearly feel the pain of Simeon’s farewell, but at the last moment “the pathway grew wider,” the deeper wisdom of Simeon’s humble and solitary departure also showed itself to him, making “Nunc Dimittis” into one of the most unequivocally Christian literary works of the 20th century.

Life becomes unbearable when it has outlived its meaning. In the Meeting, its fullness and dignity is regained; its ending becomes its triumph, crowned with a wisdom far beyond the capacity of everyday life. 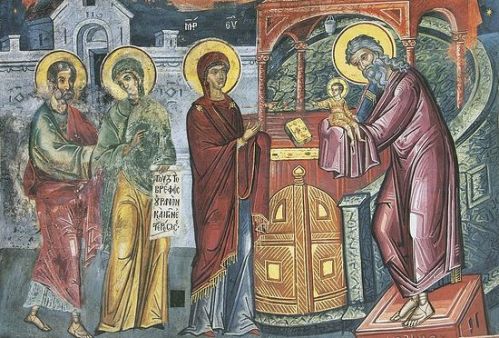 “Hail, Virgin Theotokos, full of grace! From you shone the Sun of Righteousness, Christ our God, enlightening those who were in darkness! Rejoice, O righteous Elder; you received in your arms the Redeemer of our souls, Who grants us the Resurrection.”

Troparion of the Meeting